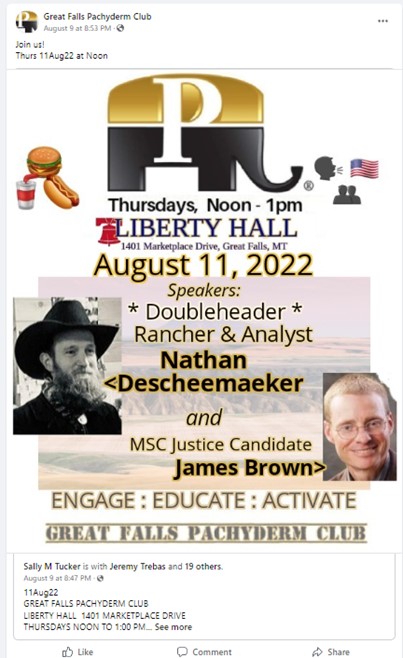 One of the most important races in Montana right now is the Supreme Court race between longtime judge Ingrid Gustafson and her entirely inexperienced challenger, James Brown. If the name “James Brown” sounds familiar, you’re probably aware of the Public Service Commission. As head of the PSC, Brown has continually voted in favor of letting Northwest Energy price-gouge us into oblivion. That upcoming 25% rate hike? You can thank James Brown for that.

Apparently bolstering energy monopolies isn’t enough for Brown. Now, despite his lack of judicial experience, he’s seeking a seat on Montana’s highest court. And he’s breaking the Code of Judicial Ethics to do it.

Unfortunately, it seems the Judicial Ethics Committee lacks either the teeth or the drive to  investigate these flagrant violations.  For those who’ve never had cause to file an ethics complaints, here’s the quick version:

You write a letter outlining your complaints, what you think has been violated, and the evidence you have to support your claim. The Judicial Ethics Committee mails you a letter saying, “Hey girl! Got your complaint, But you have to promise not to talk about it publicly until we decide if we’re gonna investigate.”  That final part is a confidentiality agreement, and it’s a vital part of the complaint process.

Why does this matter? Because Republicans tried to fuck with Gustafson by filing a complaint and then immediately informing the media. (Read more here: https://montanafreepress.org/2022/10/17/republican-operative-files-october-surprise-ethics-complaints-montana-supreme-court/)

By doing so, they not only violate the complaint process, but clearly show us that their complaint was merely a political tactic, rather than a good-faith concern of an ethics violation.

How does your intrepid author know all this? Because I filed a complaint this summer against one James Brown for clear and obvious violations of the ethical code. Unsurprisingly, the committee dismissed the complaint without investigating. Although I don’t agree with that decision, I followed the rules by not writing this piece until the complaint was dismissed. And now, I think we can leave my complaint to the ever-popular Court Of Public Opinion. Below is my complaint, with a few redactions. (Namely, I have removed the names and addresses of individuals named in the complaint.)

Enclosed please find a complaint against James Brown for violations of Canon 4.1 of the Montana Code of Judicial Conduct.

Please do not hesitate to contact me with further questions regarding these complaints.

The undersigned being first duly sworn, upon oath, state the following facts showing misconduct on the part of the following named judicial candidate:

Mr. Brown has violated subsections of Canon 4.1 of the Montana Code of Judicial Conduct (MCJC), as indicated below.
Under Section 4.1(A)(7) of the MCJC, “a judge of or a candidate for judicial office […] shall not […] seek, accept, or use endorsements from a political organization, or partisan or independent non-judicial office-holder of candidate.”
From July 29, 2022 – August 6, 2022, at the Montana State Fair, in Great Falls, Cascade County, Mr. Brown accepted an endorsement of the Cascade County Republican Party, as shown in the photo below.

Further, I believe Mr. Brown was fully aware of this display, as he was present at the Montana State Fair on the evening of August 5, 2022. Mr. Brown identified himself to me as a judicial candidate at that time. I spoke with Mr. Brown inside the building where the Republican fair booth was located. Brown appeared to be visiting multiple booths to speak with constituents. Therefore, a reasonable person would believe that Mr. Brown was fully aware that his sign was being displayed at the Republican booth.

Additionally, the attached May 5 article [updated on May 25, 2022] published in the Montana Free Press by Mara Silvers, shows Brown’s violations of Section 4.1(A)(7) and (6) of the MCJC. Major statewide partisans, including the Republican Governor, Greg Gianforte; Republican Attorney General, Austin Knudsen; Republican U.S. Senator, Steven Daines; Republican House Speaker, Wylie Galt; Republican President, Mark Blasdel; and 83 other Republican legislators, have endorsed Brown. While this cadre of endorsements themselves do not violate MCJC, Brown’s acceptance of these endorsements does violate Section 4.1(A)(7).

The names and addresses of other persons who are witnesses to or have information as to the misconduct of the above judicial candidate include:

I have not contacted this judicial candidate in regard to this complaint.

The article referenced in the complaint can be found here: https://montanafreepress.org/2022/05/25/republican-support-stacks-up-in-montana-supreme-court-race/

So what do you think, dear readers? Should this complaint have been investigated by the Judicial Ethics Committee? Let us know in the comments.

Jasmine Taylor
In My Opinion: Foster Care and Abortion
Who is Going to Vote in a Snowstorm?