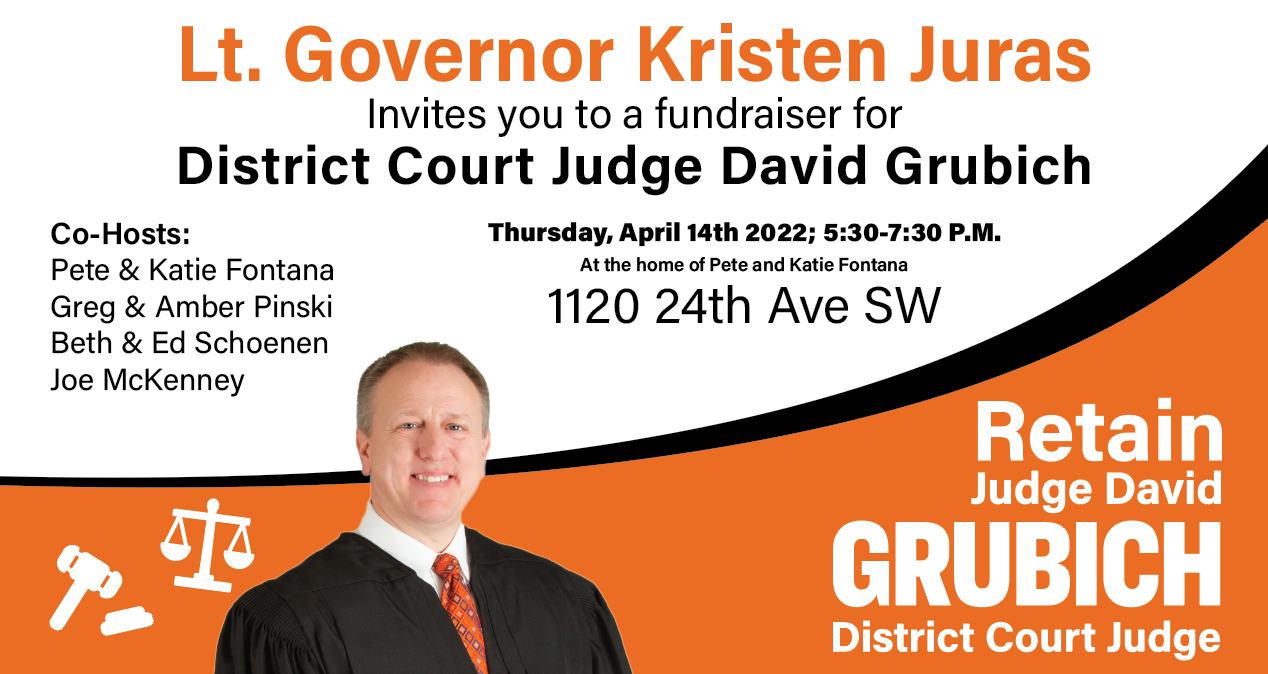 The Gianforte Administration regularly acts as if laws, ethics, and norms don’t apply to them. Gianforte has demonstrated his ethics (or lack thereof)  ranging from physical assault, stripping protection from public lands, to illegally hunting. It’s not surprising that his Lieutenant Governor, Kristen Juras, would flout norms too.  Enter Cascade County District Court Judge David Grubich.

Judge Grubich is in a race to retain his seat following his interim appointment by Gianforte in 2021. This appointment itself was an astounding violation of non-partisanship.  The Republican-led Montana Legislature refused to confirm the appointment by Democratic Governor Bullock of Michele Levine to the Cascade County District Court. It was the first time in 50 years the Montana State Senate failed to confirm an interim judge.

In a clear violation of the Judicial Conduct Code, Juras hosted a fundraiser on behalf of Grubich on April 14th.

Perhaps Judge Grubich doesn’t know the rules are different for judicial candidates versus legislative or executive branch officials? By accepting the Republican Lt. Governor’s partisan endorsement with a sponsored fundraiser, Judge Grubich is violating the Montana Code of Judicial Conduct. The Code specifically spells out the following:

Rule 4.1 – Political and Campaign Activities of Judges and Judicial Candidates in General.

A judge or judicial candidate shall not:

(7) seek, accept, or use endorsements from a political organization, or partisan or independent non-judicial office-holder or candidate.

The accompanying General Considerations text for Rule 4.1 explains why judges are held to this higher standard of impartiality and independence.

Does Judge Grubich appear to be free from political influence by accepting the partisan endorsement of Lt. Governor Juras? No.

How can we trust that Judge Grubich will be impartial and independent as a judge, if he’s willing to welcome a partisan endorsement to raise money for his campaign? Judges are not above the law, and Grubich’s failure to follow the Code of Conduct is a grim beginning to a “nonpartisan” campaign.