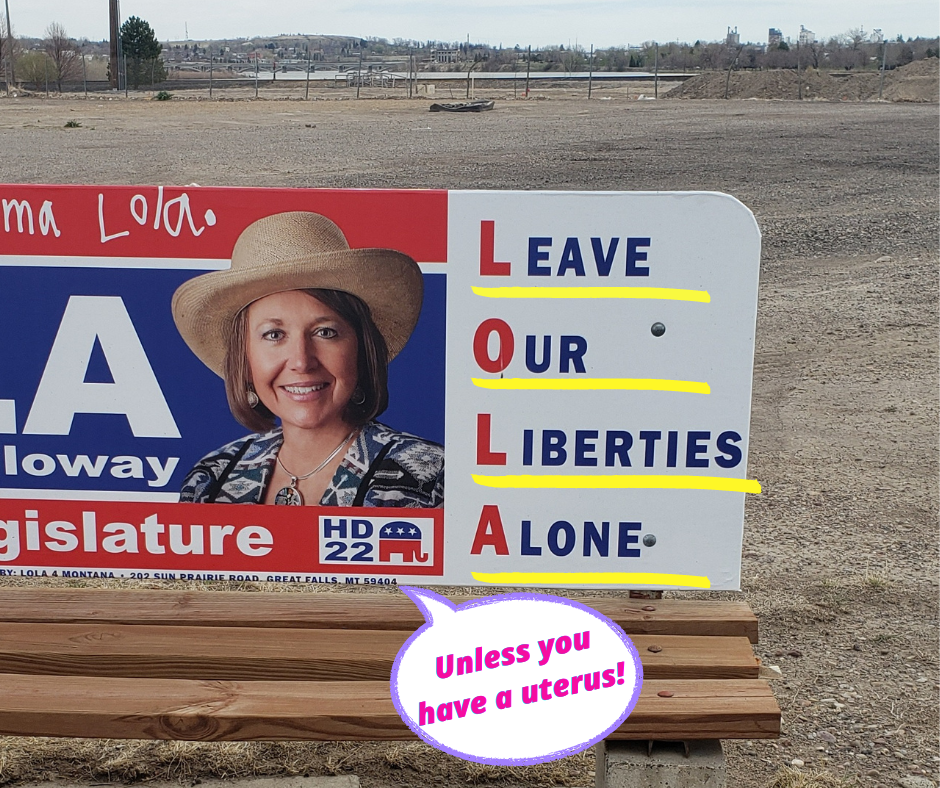 After the leaked draft Supreme Court decision overthrowing Roe v. Wade, you might be thinking,  “What the hell can I do? My country hates people with uteruses and doesn’t want us to have control over our own bodies!” And…you’re not wrong. We give corpses more bodily autonomy than a post-Roe America.

As we continue to protest and put pressure on our elected officials, local politics are our greatest hope to keep abortion legal in Montana. But only if we vote for an entirely NEW slate of representatives.

What the Funk have current Great Falls Elected Representatives been doing to strip away our fundamental human rights?

Surprised Pikachu face, every single Republican legislator from Great Falls voted for a variety of anti-choice bills in 2021!

Let’s start with the poster child for forced-birth, Representative Lola Sheldon-Galloway. You might recognize Lola from her bench ads and posters with the acronym for Lola of “Leave Our Liberties Alone.” Bitterly ironic when Lola is coming to trample all over your right to make private medical decisions. Rep. Sheldon-Galloway has supported many anti-choice bills during her multiple stints in the legislature. In 2021, she giddily sponsored HB 136 to prohibits abortion after 20 weeks of pregnancy. Your pregnancy is nonviable? Too bad, mama. You still have to remain pregnant, Mx. Incubator! Goody for us, HB 136 was signed into law by Governor Gianforte.

We’d be remiss to not mention one bill that didn’t get passed but is a telling roadmap of things to come. Representative Gillette (R-Bozeman) ultimately withdrew HB 209, which sought to give parental rights to rapists. Public outrage caused Gillette to backpedal, but the ideology remains the same – people with uteruses are incubators, not worthy of bodily autonomy.

What other anti-choice bills were passed in the 2021 session of the Montana Legislature thanks to our Republican governor?

HB 171 – A bill that adds substantial bureaucracy for people seeking a medication-induced abortion. These barriers make it harder for a woman to terminate in the first trimester. This is BY DESIGN. Make it hard to get a medication abortion, and then poof! You’re at 20 weeks and now your abortion is illegal.

And to round it off, HB 140. A bill with no provisions for victims of rape or incest, that requires medical providers to offer patients an active ultrasound with image and sound. The bill also requires the patient to sign a form saying they were offered said ultrasound and answer whether they chose to view it.

Every Republican legislator from Great Falls voted for the three anti-choice bills that were signed into law. Every. Single. One.

These legislators are extremists who vote to take away people’s fundamental human rights. We have to combat the fall of Roe and it starts here at the State Legislature level. Our lives depend on it.