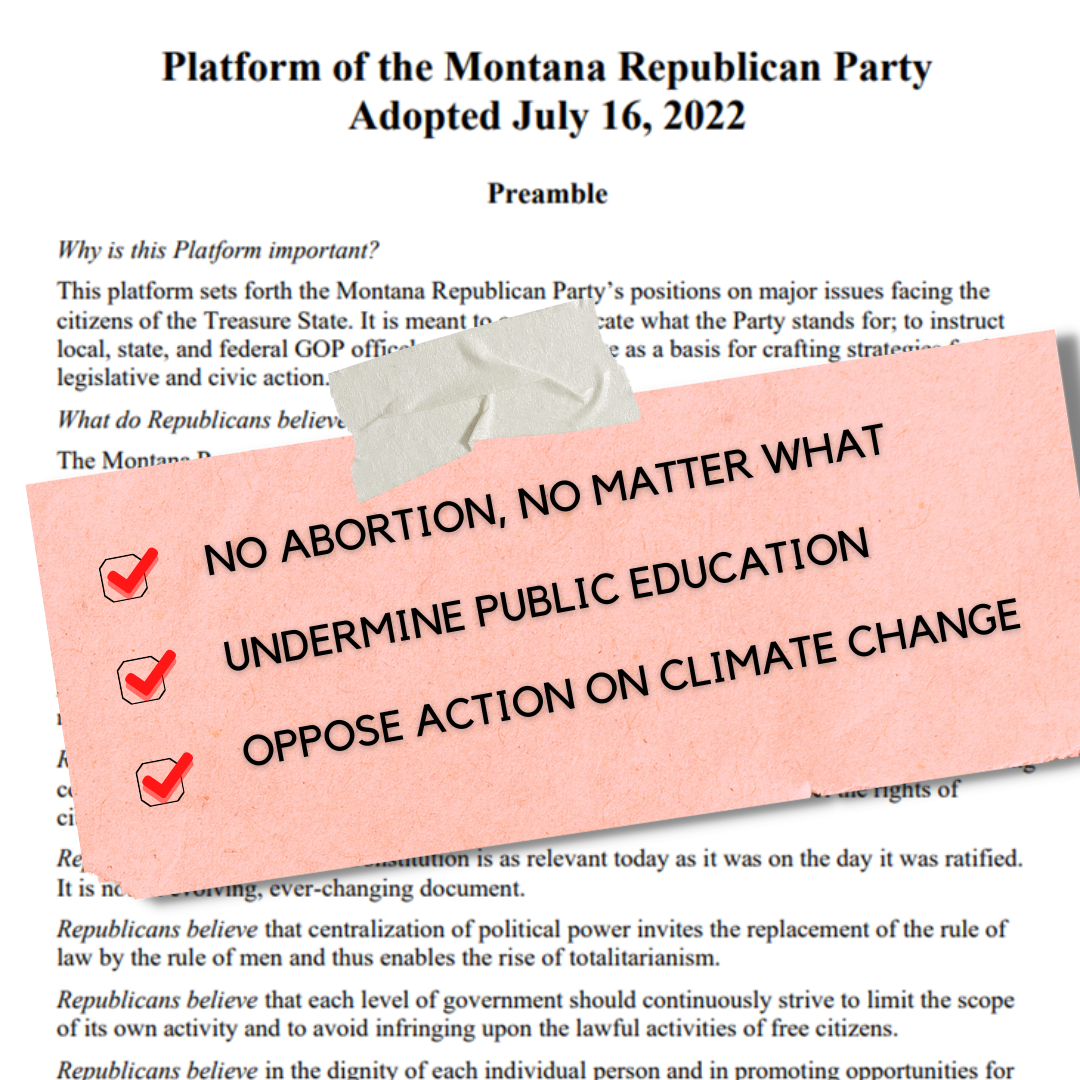 In July 2022, the Montana Republican party approved a new party platform at their platform convention. You might be asking yourself. What the funk is a party platform? Why should I care? Well, well, well, you’ve come to the right place and you absolutely should care.

What the funk is a party platform?

A political party platform is a formalized set of goals supported by a political party. By checking out a party’s platform you can see a party’s principles, goals and positions. This helps predict what legislators and leaders will actually do if they’re elected. For example, this data analysis found that “Overall, Democrats in Congress voted for positions that matched their platforms 74 percent of the time in the past 30 years, while Republicans did so 89 percent of the time.” This year the Montana GOP successfully introduced platform language to explicitly call on the Republican legislators to identify bills that link to specific elements in the platform and to pass at least 20 such bills in each chamber to ensure that “Party Platform goals become a priority each session.” We absolutely can expect the MT GOP platform to have a direct connection to the laws passed by Montana Republicans in the future.

What does a Montana Republican majority in 2023 look like?

Glad you asked! Let’s take a gander at what Montana Republicans have put in their party platform to see what kind of shit they’re bringing for us in 2023.

For abortion rights, the Montana Republican platform now states, “We support complete ban on elective abortion.” And yes, they mean a complete ban on abortions with no exceptions for rape, incest, or the life of the mother. At the Republican convention, a couple of moderate Republicans tried to soften the language to provide exceptions for rape, incest, and life of the mother. Those attempted arguments were met with boos and voted down. Cheers were heard when Republican Derek Skees of Kalispell interjected, “I was involved in helping put this language in here: life begins at conception. Period.”

Yep, they don’t care if the pregnant person’s life is in danger because of an ectopic pregnancy or the fact that EVERY pregnancy carries health risks. Born with a uterus? Boom, second class citizen. We already knew the Great Falls Republican legislators voted against our abortion rights, but this extreme language shows us how far they wish to go.

What other areas do we have to worry about? Too many to list. Here are some other areas with concerning language from the Republican party platform:

I do not look forward to living in a state moving full speed ahead towards this agenda. Republicans have made it clear that they intend to reshape Montana into a Big-Government haven with no respect for individual privacy. If Republicans maintain their stranglehold on state offices, Montana’s future looks dystopian indeed.