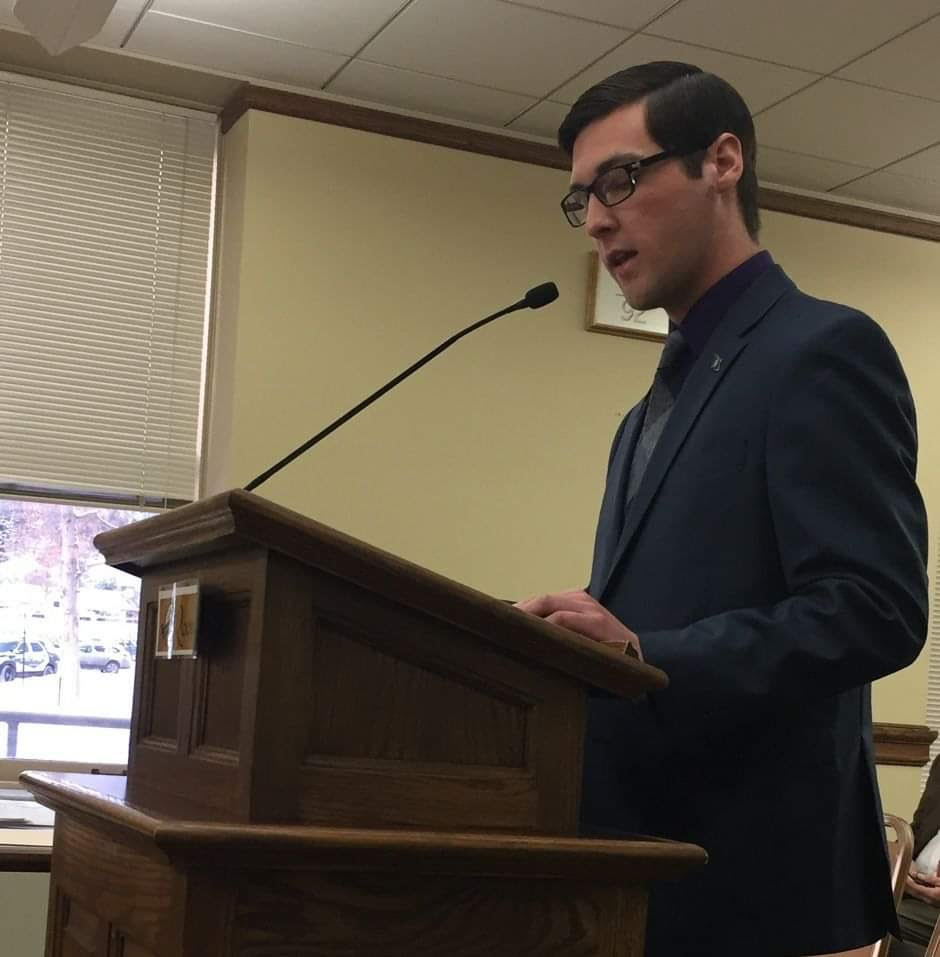 “Democrat or Republican? First thing. And when I say Democrat, they say ‘Oh you don’t want to talk to me!’ But I do. You may not vote for me but I still want to know what’s on your heart.”
Jacob Bachmeier comes across as an introvert. He’s soft spoken, thoughtful, and seems to avoid the spotlight. He admits that he doesn’t love giving speeches but would rather meet voters at their doors, having the one-on-one conversations he believes government is based on.

But don’t let his humility fool you. Bachmeier has already achieved that rare feat even veteran politicians often can’t attain. In 2016, Bachmeier flipped a district. Not just any district. A district that had been held by a Republican for eight years. And he did it at only 18 years old.

In 2019, Jacob co-sponsored HB 726, a bill that helped parents of adult children with disabilities continue to collect child support after the child turns 18. The bill was signed into law, providing much needed support to disabled adults and the parents that continue to care for them.

After taking time away from politics, Bachmeier is running in Cascade County for the first time. And much like before, he’s looking forward to a tough race. Jacob is facing off against Republican Wendy McKamey. McKamey has served in Republican held districts HD 23 and HD 19 and is now seeking a Senate term. However Mckamey’s staunch anti-choice views may prove too extreme for the numerous Republicans and Independents that support our right to privacy.

Luckily for Jacob, speaking with Republicans is a skill he’s already honed. Politics is a family affair for Jacob. He grew up hearing stories about his great-grandpa Rex Manuel (D-Fairfield).
A larger-than-life figure who served in the Montana House of Representatives during the golden age of state politics.. With a family evenly split between Democrats and Republicans, Bachmeier navigates both worlds seamlessly. So he does too with his identity as both a devout Christian and a pro-choice Democrat.

As a Queer person, I often feel cautious around folks who describe themselves as “devout Christians” for obvious reasons. (Sometimes they really don’t like LBGTQ+ people. Or women who’ve had an abortion.) I’ve known Jacob a bit for a few years now, and yet I was quite surprised to learn that Jacob is religious. When I asked why I hadn’t known this before, Jacob said simply, “I wouldn’t want someone else‘s religious views governing how I act as an individual. I try to keep my religious views out of government and laws.” Y’all.  It’s the separation of church and state for me. That VITAL separation is truly lacking in Bachmeier’s opponent.

Although I didn’t know Jacob’s religious affiliation, I do know how he treats people. How he approaches conversations with his neighbors. And how he cares about others.  These qualities are what led Jacob to becoming pro-choice. Even as a Democrat, Bachmeier entered the Legislature still unsure about how he would vote on this issue. So what changed his mind? Listening to his constituents. Bachmeier explains,

“When those bills started coming up, I would get lots of calls from people on both sides of the issue. As I got more calls form people that had abortions and told me their personal stories it became pretty clear to me that people don’t get an abortion because they think its fun. People don’t get an abortion as a common form of birth control. That’s just not how it works clearly. After talking to people there were a lot of complicated heartbreaking situations that were very unique to each individual person, and it became very clear in my mind that we can’t legislate and regulate every single individual and unique reason why someone might feel the need to get an abortion. Ultimately I decided we need to trust the people personally impacted and the medical professionals who perform those procedures.”

A candidate that is willing to learn, grow, and expand his views? Yes, please. What I learned from my conversation with Jacob is that he’s experienced both sides of the political spectrum. Politics for him is an opportunity to help his neighbor. We don’t have to share the same religious views to share the same values. His religion does not come into his politics, which is just as it should be. It does come into who he tries to be as a person.

Jacob sums it up nicely, explaining, “At the end of the day the Bible says to love all People. It even says to love your enemy. It’s very important to me to hear people out and hear what they care about. I want this country, this state, our community to be as good as it can be for everyone.”