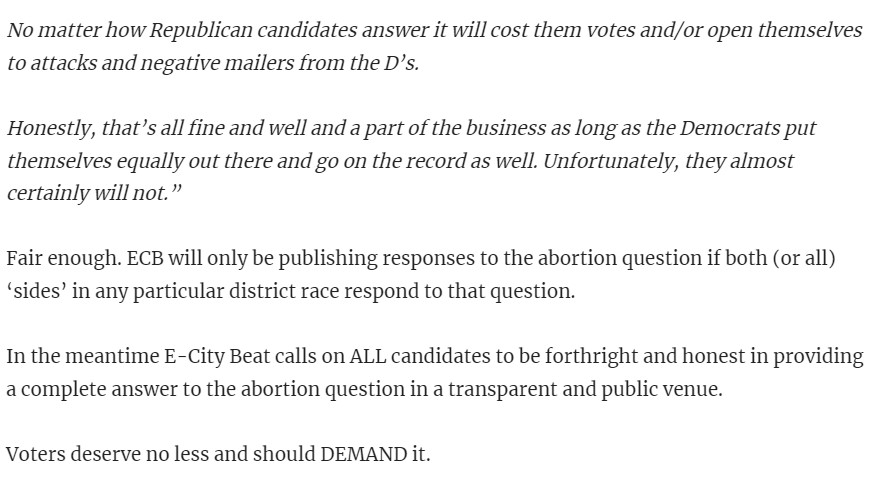 Last week, far-right blog E City Beat was seemingly shocked to discover that nobody considers them a legitimate news source. The blog’s history of unethical and misleading “reporting” is too numerous to list, but you can check out one recent example here.

WTF has highlighted Commissioner Tryon’s lack of journalistic ethics, and many candidates have long steered clear of promoting the hate-mongering of ECB’s authors. Now, the blog’s Republican base is realizing that aligning with extremism may not be the most electable course of action.

Now, the same Republicans that have benefited from ECB’s radicalism are refusing to answer a candidate questionnaire. A screenshot from ECB’s resulting temper tantrum confirms that R candidates don’t want voters to know their real stance on abortion. Luckily, we don’t need any survey from a mediocre hate blog to know where these candidates stand. A total abortion ban is a top priority for Montana’s GOP. If we want to protect privacy in Montana, we need to vote Democrat down the entire ticket.

As for ECB’s hilarious “demand” for local candidates to respond to their survey, I can’t help but enjoy the obvious sense of entitlement. I suspect were WTF to make similar demands, we’d quickly be called “snowflakes” and reminded that nobody owes us anything. I have no doubt that Democratic candidates will respond to questionnaires that come from actual journalists and news sources. In the meantime, we’ll continue to spread the word about where Republicans really stand on abortion. Truly, we never needed ECB for that.